The characteristics of CASIO’s newly developed Multi-dimensional Morphing AiR*Sound Source reflect thorough attention to detail in expressing the rich, resonating tones inherent to the piano. The capacity of the installed memory has been expanded to achieve a longer sampling duration and enhanced waveform data quality. The temporal changes in tone that create sound you would expect only from a piano, beginning with the initial sound and leading into a beautiful extension until the sound eventually vanishes, are reproduced naturally. Even the length of the reverberation can be controlled at will by the player by adjustments in touch, as with an acoustic piano. Seamless variations that respond continuously to the power behind each stroke, not only in terms of volume but also in terms of the nuances of the sound itself, range from a fine, gentleppp(pianississimo) to an intense, powerfulfff(fortississimo). All 88 keys incorporate a stereo resonance simulator, moreover, that reproduces the string sounds of a grand piano remarkably realistically. The pleasure of listening to acoustic changes can be obtained by opening the grand piano-like lid installed on high-end models (AP-650M, AP-460), which place a particular focus on sound output quality. These developments represent an unprecedented evolution of the digital piano’s expressive power in the areas of both sound and resonance.

The acoustic level achieved by a digital piano is determined by the capacity of the memory that stores sounds after sampling. A new high-capacity memory, boasting a capacity in excess of approximately three times our previous models (converted linearly), is installed for the Multi-dimensional Morphing AiR Sound Source. The waveform data sampling capacity has increased dramatically, enabling natural reproduction of the delicate changes in waveforms associated with concert grand pianos. The sound quality and resonance have achieved astonishing evolution, realizing an ability to produce simultaneous sounds comprising up to 256 notes in high-end models (AP-650M, AP-460).

The external designs of the AP-650M and AP-460 models feature a lid on top that can be opened and closed. Opening the lid enables the pianist to play music with abundant dispersed sound, much like that produced by a grand piano with its lid open. 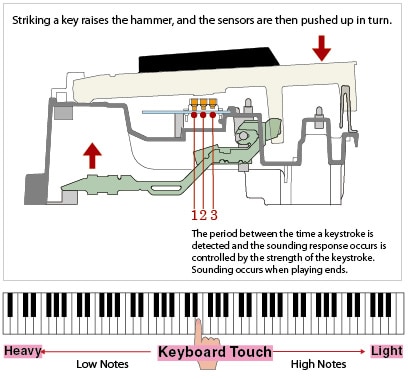 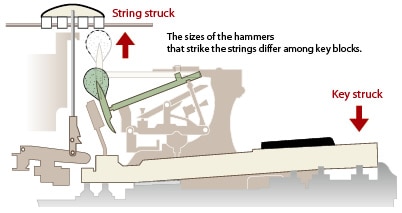 Pianists can use the audio recorder to record their own performances on USB flash memory (sold separately). Since the recording employs the WAV file data format, performances can be played back*with CD sound quality on either the instrument itself or another device such as a PC, audio system or portable music player.*Playback possible on WAV file compatible devices.

A variety of built-in musical pieces can be played back for either listening pleasure or use in piano lessons. (Collection of musical scores bundled.)