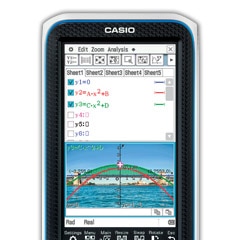 Formulas, graphs, and other graphics are sharp and clear.

The fx-CP400 has simple, easy-to-understand menu icons, menu bars, and toolbars and an interactive interface.

Touch-panel operation by stylus or finger

Create a graph by selecting a formula
and using drag and drop.

The CAS supports everything from Expand, Factor, Solve, and other basic commands to advanced commands like Fourier and Laplace transforms.

An eActivity is like a digital worksheet that can be created andworked with on the fx-CP400. All of the powerful features andcapabilities of the fx-CP400 can be incorporated into aneActivity. In addition to performing the same calculations asthe Main application, an eActivity will accept text entry, justlike a word processor. Graphs, as well as Geometry andSpreadsheet data, can be stored in an eActivity file. The calculator comes pre-loaded with visuals such as a single image (still image) of the curve of an arched bridge. The use of real-life visuals as background images for functionssuch as the drawing of graphs overlaid on color images makes mathematics learning a more visually familiar experience. 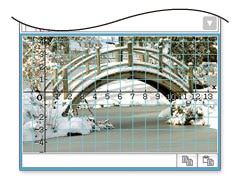 Select the formula for the graph you want to create. 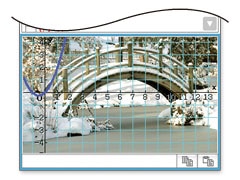 A graph screen with a visual appropriate for creating a graph of the selected function is displayed. 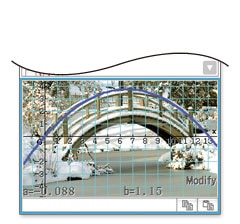 Congratulations! Your graph is complete.

Change the graph by repeatedly changing coefficient to create a graph that visually matches the parabola.

Display formulas and related graphs in the same color and highlight graphcharacteristics by displaying scale marks, grids, and coordinate values. The vivid colordisplay of the fx-CP400 improves the visibility of graphs and formulas.

A different color for
each graph and figure 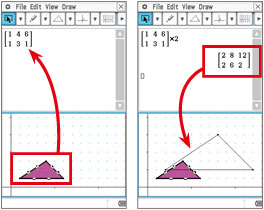 Collected data can be organized and tabulated for analysis after statistical graphingis complete. Spreadsheet data also can be used in table calculations. In addition, thefx-CP400 supports the following functions: search, sort, data import from and exportto lists, matrices, and variables, CellIf, and Histogram/Box-whisker graphing.

The fx-CP400 features the Color Link function, which automatically links colors specified on the spreadsheet screen with colors used in graphs to support learning of functions by enabling visual confirmation of changes in values or trends. 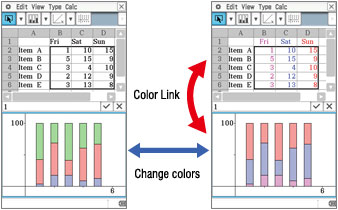 Use Color Link to link the color of text and graphs.