This G-STEEL variation is a new signature model that was designed under the supervision of NBA professional basketball player Rui Hachimura.
The hour marker at 8 o'clock is red, representing Hachimura's jersey number. Also, the Japanese word for 8 is hachi, which is also part of Hachimura's name. The button pipe of the Bluetooth® connection button at 8 o'clock and the indicator disk are also done in red.
The gold IP (ion plating) of the bezel and case parts along with a Rui Hachimura logo on the band ring and package create a bold, sporty look befitting of a special model such as this.
But the great-looking design of this model is only half of the story. A simple operation connects with the G-SHOCK Connected phone app for quick and easy time adjustments, simplified timer and other function settings, phone number searches and more. A high-brightness LED light enables easy reading of the display, even in the dark.
This new tough, sporty and fashionable timepiece captures the essence of everything that Rui Hachimura represents.


Rui Hachimura
Born in Toyama prefecture, Japan on February 8, 1998.
After graduating from Meisei High School in Miyagi prefecture in 2016, attended Gonzaga University in the US.
He became the first Japanese national to play in a National Collegiate Athletic Association (NCAA) tournament, on a Gonzaga University team that made it the final of the national tournament. Hachimura won the Julius Erving Award for the 2018-2019 season, which recognizes the top men’s collegiate small forwards of the year.
Made history by becoming the first Japanese-born player to ever be taken in the NBA Draft, going to the Washington Wizards with the ninth overall pick. 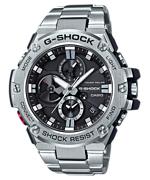