Unprecedented Natural Reproduction of the Rich Expressive Power and Resonance of an Acoustic Piano.

Casio developed its Multi-dimensional Morphing AiR Sound Source to seamlessly reproduce the natural changes in the tone, volume and timbre of a grand piano from the moment a note sounds, through its beautiful sustain, until it finally vanishes away. Even the length of the reverberation can be controlled like an acoustic piano by adjusting the force of the keystroke. Players can also control the sustain of beautifully resonating tones according to their performance styles by using the piano’s built-in String Resonance function, which simulates the distinct reverberations of all 88 keys of the keyboard, a function that reproduces the resonant effect of a damper pedal.

The Privia PRO PX-5S has a maximum polyphony of 256 notes, making it a highly expressive instrument for performing.

Also included are 60 keyboard instrument presets, including “electric piano,” which seamlessly reproduce the changes in tone quality according to the force of the keystroke, and “clavi,” which captures the tonal character when the finger leaves the key.

50 Hex Layer presets layer as many as six tones for ensemble sounds.

Another 220 presets cover a wide variety of musical instruments including organs, strings, and guitars.

Users can also choose from 20 drum sets customized for a broad range of musical genres.

The Digital Signal Processor (DSP) allows a wide range of effects to be applied to four different parts. It also comes with Master Effect for adjusting the EQ and Compressor, and System Effect for controlling delay, reverb and chorus.

Users can produce original Hex Layer sounds by combining as many as six preset tones.

The Envelope Response Pedal also enables control over volume and other parameters during performance.

Users can assign performance setups for up to four designated keyboard zones by using the Stage Setting Function.

The Phrase Sequencer lets users create and play back musical phrases to enhance their performances.

The Privia PRO PX-5S can be used as a master keyboard to control the sounds and settings of externally connected MIDI instruments.

The High-Resolution Velocity expresses the force of a keystroke over 16,256 gradations.

The Hammer Response reproduces the variations in the attack of the notes depending on how forcefully the notes are struck and the register of the keyboard.

The Key Off Simulator simulates the changes in tone according to how fast the finger leaves the key.

The instrument’s black and white keys look and feel like real ebony and ivory for a luxurious feel and texture as well as a smooth touch.

Optimal for a wide range of playing conditions and performing styles

The instrument is lightweight and slim at 11.1 kilograms and 28.6 centimeters deep, making it convenient for carrying to the stage or studio.

The instrument can be powered by either an AC adaptor or batteries, a convenient option for performing on the street and other outdoor settings.

Portable audio players or MIDI devices can be placed on the rubber holding space. 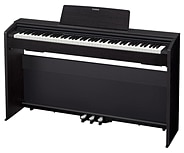